From The Fire District of King County by Harold “Jiggs” Hoyt

In 1906, John and Elmer Benson made a $10 down payment for some acreage on the hill south of the city of Renton. Access to the property was by way of a trail until 1912, when the County Commissioners had the route surveyed. In 1916, a dirt road was constructed to the top of the Spring Glen Hill and named Benson Road. It was passable only during the dry months, and in 1917 the road was covered with gravel by the county and extended past the top of the hill to where Petrovitsky Road is today.

Slowly, the community of Benson Hill developed into a nine-square mile area with scattered chicken houses and small family ranches. More and more people were attracted to this picturesque, rural area. There were a few fires here and there, but really no way to put them out unless one had a garden hose, or a bucket and fire barrel. After a fire in the winter of 1947, some concerned citizens gathered in the Spring Glen Community Center to discuss the matter of fire protection. A committee was formed to obtain information on starting a fire district. Petitions were signed and presented to the County Commissioners on July 24, 1948.

In April of 1949, an election was held and citizens in the area voted 126 for and 10 against the formation of King County Fire District 40. The committee had also placed a bond issue on the ballot to raise funds for a fire station and all the needed equipment, including a fire engine. That measure was also approved and the District became a reality. All the locals called it the Spring Glen Fire Department. 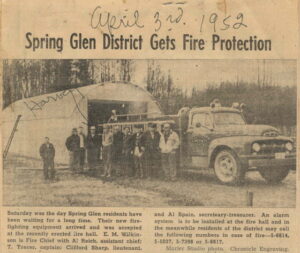 An order was placed with the Howeard-Cooper Company and in 1952 the District took delivery of a 1951 Ford F-8 500-gallon tanker fully loaded with firefighting gear. It was dubbed Engine #2; no one has been able to explain why it was not called Engine #1. The fire station, consisting of a four-foot-tall cinder block foundation with a Quonset hut perched on top, was still being constructed at the time. It was built on a large lot at the corner of Petrovitsky Road (SE 176th Street) and what is now called the Benson Highway (or 108th Avenue SE).

In the beginning, 28 volunteer firemen were signed up and about the only one with any real firefighting experience was a man by the name of Elwin Wilkinson. Elwin became the District’s first Fire Chief in 1952.

A group vital to the all-volunteer department was formed by the wives of the firefighters. Nicknamed the Firebelles, they were always on the scene with coffee and doughnuts on cold nights and lemonade on the hot days. In addition to their support activities on the fireground, they held bake sales, dances and other fundraising events. The early members managed to make enough money to furnish the station with cupboards, a refrigerator and a range.